Admit it, in Florida you’re constantly looking for ways to shield yourself and your car from the incessant sunlight. The Sunshine State isn’t just a casual nickname. The warmth and constant light are probably what drew you here, but you also know even too much of a good thing can be detrimental. Imagine the ability to both provide shelter from the sun and channel that sunshine into electricity, and you’ll understand the brilliant practicality of solar carports.

Solar carports function specifically to supplement your solar system. You don’t have to find extra roof space for these extra units because they utilize the space typically lost to asphalt or parking areas. They complement your current system and can generate up to 20% more electricity than fixed rooftop-mounted systems.

Think of the practical benefits, too. They increase your property value while also providing shade for vehicles. That’s a bonus to you whether you’re the one utilizing the shade or your employees.

You can customize a carport to be nearly any size or shape you need it to be, from big enough to cover one car to dozens, so odd-shaped land or parking lots shouldn’t be a problem. Just the benefits of solar carports alone should be enough to convince you to explore this opportunity, but let’s look at the numbers.

If your company is switching to solar, you can’t afford to overlook solar carport options, and here’s why.

First, solar carport costs have been dropping since 2010. That’s in part due to the rise in popularity of solar carports (a standard supply and demand example), and an increase in solar technology that makes solar equipment more cost effective.

Second, solar power incentives from the federal government have been helping mitigate the costs of solar carport installation and provide quicker payback. And combining associated structures like solar carports helps you to save on the whole solar package, as it’s all included in the solar tax credits.

In fact, when you bundle a carport with solar power, you can receive up to 68% tax credit back on the entire project. But that’s just for now. With these credits set to expire at the end of 2016, there’s more of a financial urgency to switch to solar than ever before.

Last, solar carports help provide security against rising utility costs, whether that’s from natural inflation or from other economical fluctuations, like TECO’s new ownership. See the chart below for a representation of how quickly solar power can pay back its installation fees, just by providing you with a steady, independent source of energy. 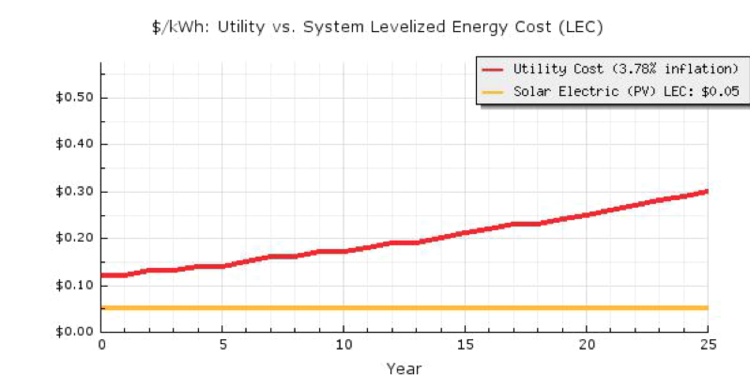 If you have questions about how to bundle solar carports with your energy package—or about solar carports in general—don’t hesitate to give us a call. We’re always happy to give advice and to help you crunch numbers and find out the best way solar fits your needs.